trauma and your child's developing brain-
understanding the Nature/nurture debate
and how a neuroscience, somatic practice lens makes all the difference to therapeutic outcomes . 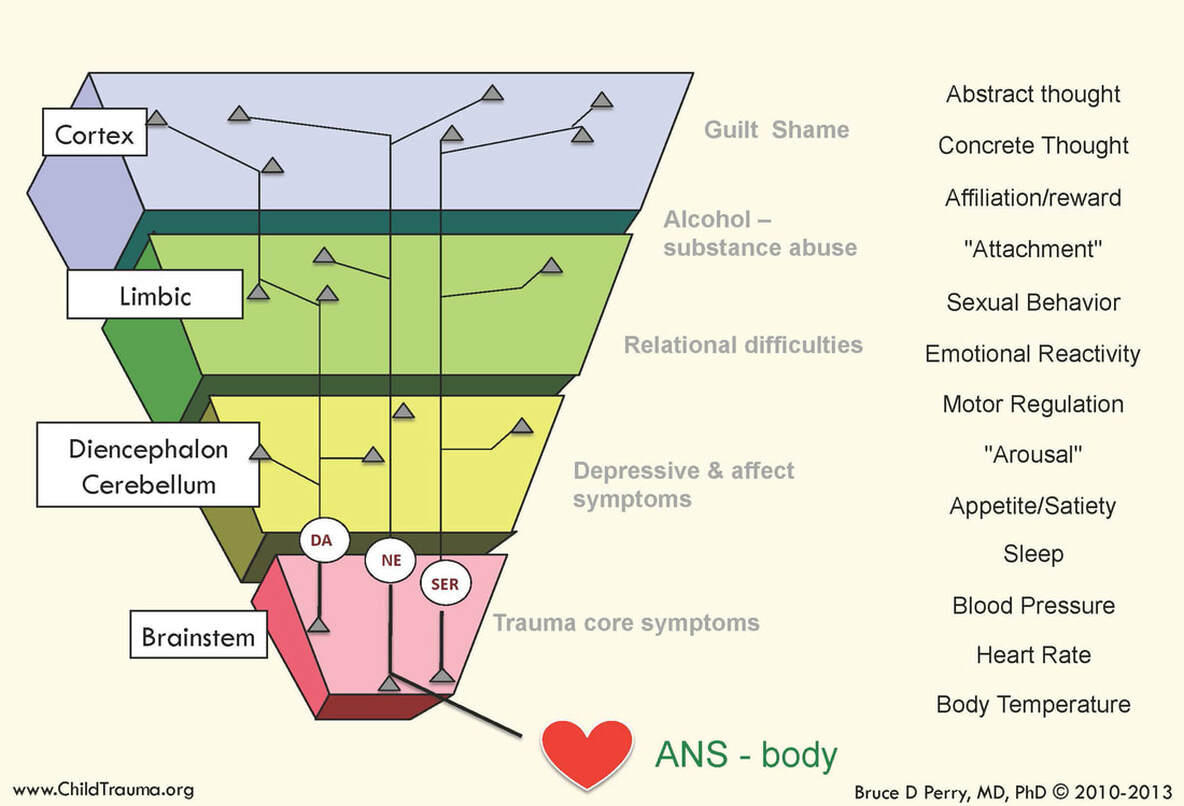 The Neo-cortex , the next in line for development controls abstract thought, the ability to think rationally and develop cognitive memory. This area of the brain begins to develop between the age of 3 to 6 years old and continues to develop until the age of 25.  Unless this part of the brain is developed on a healthy foundation it is unlikely that it will reach it best potential. Also while your child may grow to be academically effective their home, relationships or inner life may be hugely disrupted and unhappy. For without the solid foundation of a highly organized brain stem and diencephalon working to organize it and a Limbic area that is stable and capable of the accurate inner and outer perception of danger and emotional regulation, engaging and developing this area of the child's brain may be like building on a foundation of soft sand which increases the likelihood of collapse or burn out later on.

Of course, no parent wants their child's brain and development to be damaged or compromised. No parent starts out wanting to get parenting wrong or wants their child to lose out.  However, with all the best intentions in the world there are many things that are beyond our control. Many of these traumas are part and parcel of our modern world.  Maternal stress levels during pregnancy, birth complications, premature birth, maternal depression, anxiety, conflict between parents, postnatal and postpartum depression,   poverty,  trauma and attachment issues in the parents own family of origin, psychological and biological history. When these impact the infant, in the pre and perinatal period (the first six months), and up the age of five, it won't just work itself out. It will require careful therapeutic intervention specifically targeting these areas of the brain to heal and a therapist to guild the child and her parents or caregivers to mend the attachment ruptures caused by early trauma.

Play and drama therapy are powerful means of joining with the innate, creative, non-verbal capacities of children in order to engage and work therapeutically with them. Play is for everyone and I utilize in its various forms throughout both my practice and in my work with Foster carers and young children in State Care.

Play and drama therapy are considered a developmentally appropriate, evidence-based method for counselling younger clients. In play therapy, children can play out, literally or symbolically, their inner and real life experiences in a way that builds insight and capacity.  Play therapy allows children to express, regulate, communicate, practice and master new skills as well as their emotional responses to those events.

Non- directive play therapy is considered the gold standard of play therapy because it allows the child to organically work toward their own healing. Unfortunately as good as non-directive play and drama therapies can be,  where a child has been damaged developmentally by events beyond their control, more facilitation is needed. For example a child who has been beaten or bullied may over and again curl into a ball on the floor and not complete the healthy response of defending themselves or engaging in flight responses needed to escape that trauma. This is because, like us, the child has a strange attraction to the original trauma. To leave this unattended and allow the child to disappear into helplessness so that they are going down the rabbit hole of the original trauma again and again and not guide them to engage with the suppressed and stuck defensive responses trauma and injury,  leaving the deeper traumas' unresolved, is not healthy or healing. Therefore to heal trauma we need a more contained response, a sound knowledge of,  the autonomic nervous system (ANS) and the ability to see it shift and to playfully as their play companion Shepard them through their fight, flight and freeze responses to bring them to a healthy recovery.

Somatic experiencing, organic intelligence and somatic touch practice offer the lens and skills to work with the nervous system not provided by traditional play and drama therapy. This is a finely tuned process which I have developed over years of working as a somatic and organic intelligence therapist as an experiential theatre director and play/drama therapist. It is a process where I have learned to follow the cycles of the nervous system carefully to ensure that when necessary I can creatively and playfully guide your child through those cycles ensuring that they create new pathways of regulation out of trauma responses and that they grow the capacity to investigate their impulses toward safety and resilience.  This guidance enables the child to move through trauma in their play toward gaining healthy responses to challenging situations (without having to "learn" to act appropriately) and for them to develop secure attachments with their caregivers. 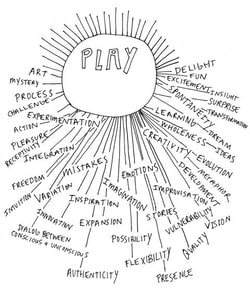